The 50th anniversary diplomatic relations between China and the Netherlands 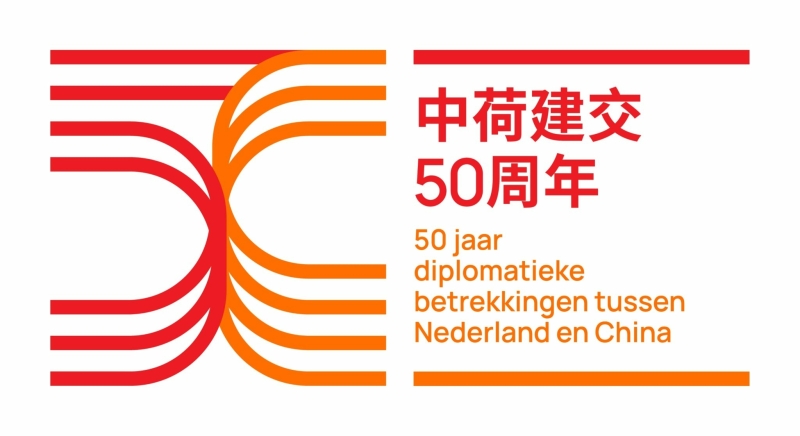 About the design of the logo

1. “Water” is the basic design element of the logo which consists of abstract water flow lines, because “water” has important meanings in both Chinese and Dutch history and culture. Since ancient times, China has had the philosophical concept of “Shang Shan is like water” and historical allusions such as “Da Yu controls the water”. The Netherlands itself is famous for its “sea coachman” and has a tradition of living towards the sea and reclaiming the sea to build farmland. Water conservancy projects such as China’s Dujiangyan and the Netherlands’ sea-blocking dam are well known to the people of the two countries. “Water” is the embodiment of the cultural traditions and national characters of the two countries, such as openness, tolerance, innovation and perseverance.

2. The main shape of the logo is the number “50”. At the bottom of the “50”, there are overlapping characters for “people”, “the relationship between countries lies in the blind date of the people”, which symbolises the long-standing friendship between the people of China and the Netherlands. As early as 400 years ago, China and the Netherlands started economic and cultural exchanges through the “Maritime Silk Road”. “50” is unfinished, which not only reflects the important milestone of commemorating the 50th anniversary of the establishment of diplomatic relations, but also implies that China-Netherlands relations will continue to develop with the 50th anniversary as a new starting point.

3. The logo uses two colours, “China Red” and “Dutch Orange”, and writes “50th Anniversary of the Establishment of Diplomatic Relations between China and the Netherlands” and “50 Jaar diplomatieke betrekkingen tussen Nederland en China (50th Anniversary of the Diplomatic Relations between the Netherlands and China)” in both Chinese and Dutch languages. This anniversary logo presents both Chinese and Dutch elements.